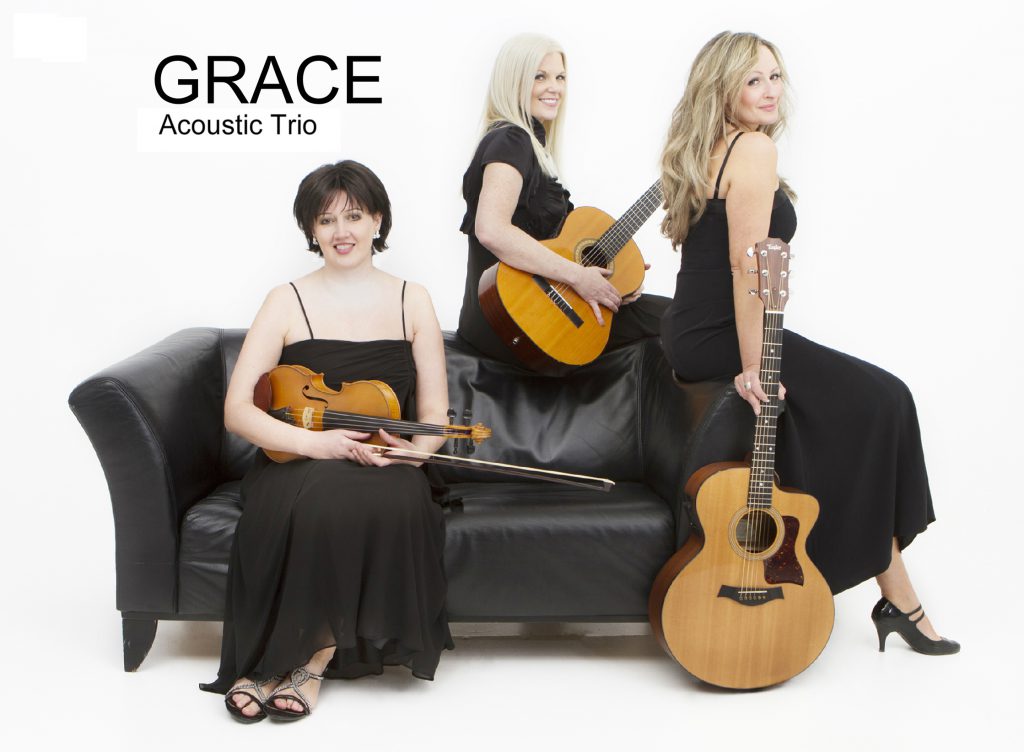 GRACE ACOUSTIC TRIO have a wealth of experience within the music industry.  As they are all very busy ladies their line-up sometimes features guest musicians.

Sisters Carolyn and Adele studied at the Leeds College of Music – Carolyn on viola and Adele on violin and vocals. Growing up in Leeds they performed in various bands and orchestras which lead to them both being

singer/songwriters. Adele currently writes and performs her own material which is  regularly played on BBC Radio1 Xtra & Radio 2. With her ability for perfect harmony and extensive vocal range Adele has mesmerised many audiences!

As well as playing viola, Carolyn sings backing vocals and also plays the violin and cello and has written and recorded arrangements for various pop acts, as well as composing her own music.

Sarah’s versatile voice and extensive range has secured her sessions on many popular recordings.  She appeared on Oceanics number two hit ‘Insanity’ and the Christians’
album ‘Prodigal Sons’. She has also provided backing vocals for Tony Christie, Kevin Rowland  (Dexy’s Midnight Runners) and her recent recording credits include a featured vocal on the Robbie Williams track ‘Break America’.

Having trained as an actor-musician at Rose Bruford College in Kent, Rosy completed her training on violin at the Royal Northern College of Music.

After three years of working with street children in Africa on music and drama projects she returned to the UK and has been in great demand having been a member of a variety of orchestras and touring with international acclaimed country band The Swing Commanders.

Cumbrian-born multi-instrumentalist Kathleen, comes from a rich heritage of folk tradition, enjoying a childhood frequenting folk festivals with her morris-dancing father and clog-dancing mother. Indeed, she began her illustrious musical career playing recorder for the Furness Clog Dancers alongside her twin sister, at the age of seven. She continued her musical training throughout school, and went on to study classical violin at The Royal Northern College of Music.

Over the years she has also mastered piano, alto sax, and a little guitar. These days, Kathleen can be found performing in a wide variety of musical settings, as comfortable playing with an orchestra or string quartet, as she is singing in a jazz club. However, she always returns to her folk roots, and loves most of all to make music with her family.

Tracy has been a professional vocal/violinist and entertainer for twenty years.  She is classically trained and currently plays in the Salford Symphony Orchestra.  She has appeared on the BBC television show ‘Running Late’, Channel 4’s ‘The Gold Project’ and featured as a singer in ‘When the Lights Went Out’ which was released in cinemas in the UK in 2012.

Tracy also worked as a session vocalist for Red Rose Radio and was resident vocalist at one of Manchester’s top nightclubs ‘The Ritz’.