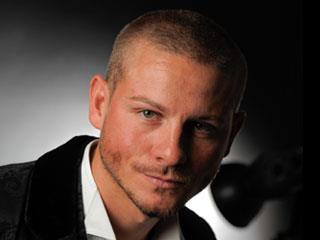 “One singer in particular was Victor Michael whose voice was exceptional singing a range of songs including those performed in the West End, the Three Tenors, Pavarotti etc – not to be missed!” – P&O Azura February 2012

Victor Michael was born in 1981 in Manchester to a musical family going back generations. His Grandma was a concert pianist who received a Fellowship whilst only a teenager. His Father was a very successful band leader. His mother was a singer and dancer until she recently retired at 65! Victor began his professional career at the age of 17, playing the guitar and singing in his fathers’ band at the famous Manchester Ritz Ballroom, now known as the HMV Ritz.

After this apprenticeship Victor trained Classically at the Royal Northern College of Music where his love of classical singing developed and blossomed.

At the age of 32 Victor Michael is one of the most successful and sort after Tenors in the UK. He has performed his show all over the world. Frequently boarding the most luxurious of cruise ships, Silver Seas, Oceania, Royal Caribbean, Celebrity, (Solstice Class) Princess and the UK’s very own P&O Azura and Ventura. Victor’s voice has also had him travelling to Dubai, performing in their private members Polo Club and singing at Corporate Events and Weddings in locations such as Milan and Tuscany.

Another major part of Victor’s career has been his recording and song writing. He has had the fantastic opportunity to work with some of the most successful record producers in the world – Peter Collins, Gordon Lorenz, Tim Duncan, Steve Millington, Roberto Danova and Lee Monteverdi.

‘The Phantom of the Opera Ice Show’ was Victor’s first major studio session work, and he was asked to feature on several of the songs in the show. It was produced by Roberto Danova who is a renowned and well respected Italian producer. The ‘Phantom of the Opera’ DVD and sound track is available now.

During the above recording Victor was overheard and consequently invited to record in Nashville Tennessee. A wonderful experience and amazing for him to be able to see some of the world’s greatest musicians at work.

Corporate work features heavily in Victors diary and he has had the pleasure of performing at events and venues such as The Ciao Italia, Manchester City Football Club’s Gala Dinner, Red Cross Ball, The Midland Hotel, Manchester United Old Trafford and the Old Trafford Cricket Ground.

Victor has also taken his show on tour as a solo act with his Orchestra but also with his ‘Three Sopranos’ performing in Theatres such as The Buxton Opera House, The Blackpool Opera House, Gracie Fields Theatre, The New Floral Pavillion and the Birmingham Symphony Hall.

Victor’s voice and persona on stage also lends perfectly to Weddings and private functions, performing in beautiful Golf Clubs around the country and also regularly providing entertainment for The Masons, The Rotary Club and various Warner Hotels.

Victor Michaels’ golden voice speaks for itself. His relaxed and natural manner onstage enables Victor to reach out to a varied audience, bringing classical music to the masses.

Victor currently resides in Manchester with his Wife and Daughter.
“From cruises to corporate and theatre Victor is the complete performer, we have watched him blossom over the years into the showstopping act that he
is today, may he go forever onwards and upwards” – Anthony Scott

“We love attending the nightly entertainment in the theatre and were not let down on this cruise. Vocalist Victor Michael was awesome!” – Celebrity Equinox Cruise Review

“Saw you on Adventure of the Seas in late July 2014. Brilliant performance and such a good range of songs. The audience certainly enjoyed the show. Thank you for having a photo taken afterwards.” – Cathy Fone

“We saw you on the Azura and thought you were brilliant.” – Yvonne Headford

“Enjoyed so much hearing you sing on our Saga Sapphire ship cruise and really loved your performance! – Anne Driscole