The Many Faces Of Dean Taylor

Home Supporting Acts and Attractions The Many Faces Of Dean Taylor 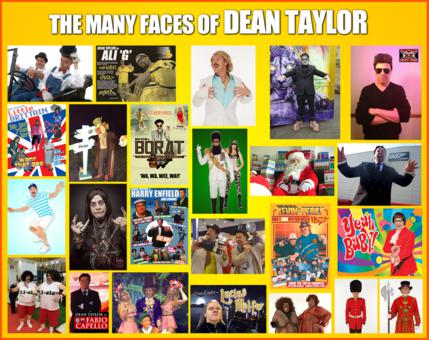 Dean Taylor is an incredibly gifted impersonator, actor and improviser with over 20 years experience in the show biz world. So much so, he often ‘updates’ the script as he acts and is well known for his hilarious ad-lib questions and throw away comments in a live show or event, which are done to the point of perfection.

A great deal of Dean’s work is for private parties (‘gigs’) as well as performing in events, sales film clips, training DVDs and webcasts for the corporate business world. In these environments, Dean still has the habit of not keeping to a script which often results in film retakes. Not because Andronicos is an overly fussy writer/director, but because their film crew and clients (who are either watching or taking part) are usually in hysterical laughter.
Some of the most popular characters are listed below.div>